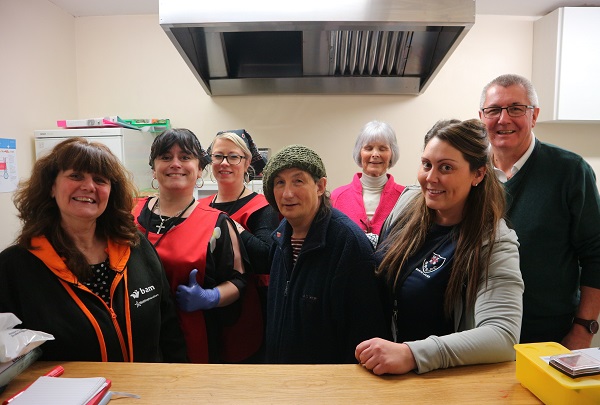 A NEW volunteer-run cafe where every cuppa and meal sold raises money for charity is proving a big hit.

More than £1,400 has been raised since the charity cafe at Barton Hill Rugby Club’s Speedwell ground opened at the beginning of February.

People have been packing the cafe at the clubhouse in Duncombe Lane on Monday and Wednesday lunchtimes to enjoy the cooked meals, hot drinks, treats and company on offer.

The volunteers are working to help two good causes – mental health charity Mind and a young girl who needs support for a physical disability.

Holly said: “It’s all voluntary – every bit of profit we make is going straight to the two charities.”

Its first target is £3,100 – of that, £2,300 will buy a specialist splinted Lycra suit, called a Second Skin, for Edie Browne, a young girl who lives near Bristol and has complex physical disabilities including scoliosis, a curvature of the spine.

Holly, above, says Mind is a cause close to the hearts of rugby club members.

She said: “So many men have mental health issues and don’t talk about it. The RFU has been working with Mind and last year our club raised over £2,000 for Mind through social events.”

Mandy said things are going so well that the cafe is applying for official charity status.

She said: “We didn’t expect to raise so much. It’s lovely that people are getting behind it.

“We’ve been amazed by the support – it’s absolutely fantastic.”

Holly said: “The response has been amazing. I’m so pleased at how many people have turned up to support it.”

The cafe was originally going to run one day a week but expanded to two when the Bristol Community Friendship Club was unable to continue its Monday sessions at the club, which many of the charity cafe volunteers were already helping with.

Building firm BAM Construction, which Mandy’s sister-in-law Lisa Hawker works for, has donated kitchen equipment for the cafe, while Tesco and Greggs are donating food on an ongoing basis, with further help from the Co-op and Krispy Kreme. The cafe has also signed up to the FareShare scheme which redistributes surplus food from supermarkets and producers.

The Voice attended the official opening event for the cafe in early February, when more than 50 people came to have lunch or a drink.

Customer Dennis Lear had travelled from New Cheltenham to visit the cafe.

He said: “I’ve been disabled for a long time and I’m always looking for somewhere I can go out and meet people, otherwise I would just be sitting at home, staring at four walls. I need somewhere to go and talk to somebody.

“Everyone has just been so friendly. The food and drink is brilliant, too.”

The cafe is open from midday to 3pm every Monday and Wednesday, except bank holidays.