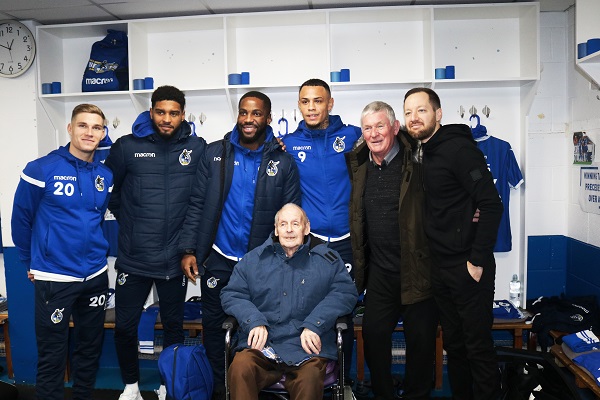 A LIFELONG Bristol Rovers fan was given the VIP treatment for what could be his last visit to see the club he loves.

Peter Francis first went to watch the Gas when he was eight years old and has been to hundreds of matches.

But Peter’s health is rapidly failing and he is now living in Brunelcare’s Orchard Grove care home in Whitehall.

After hearing all about his Rovers obsession, carer Tracy McConnell decided to organise a special day out for him and after contacting the club she received a call from chief executive Adam Tutton inviting Peter, 74, and his best friend Brian to a home game.

Peter, a born and bred Bristolian who lived in the Whitehall area before moving to Orchard Grove, had lunch with the club’s directors and met the team before watching the match from executive box number one at the Memorial Stadium.

And although Rovers couldn’t make it a perfect day with a win – the match against Fleetwood Town finished 0-0, with a late Rovers penalty saved – Peter still had a day to remember.

He said: “I couldn’t believe it when Tracy told me, it’s honestly a dream come true. I’ve been supporting Rovers for 66 years and went to my first match when I was just eight years old, in 1954. I’ve been a season ticket holder for over 55 years. Going to see Rovers home or away was a way of life for me, it’s in my blood. We’d always get fish and chips after the match, whether we lost, won or drew.”

Tracy Said: “I heard all about Peter’s obsession with Rovers and I knew I wanted to surprise him!”

Adam said: “All of us at Bristol Rovers Football Club were delighted to welcome Brunelcare resident Peter Francis to join us for our match against Fleetwood Town.

“We heard that Peter was a lifelong Bristol Rovers fan and were delighted to be able to offer him the opportunity to join us in our boardroom and meet some of the first team before kick off. We hope it was a very memorable day for Peter.”