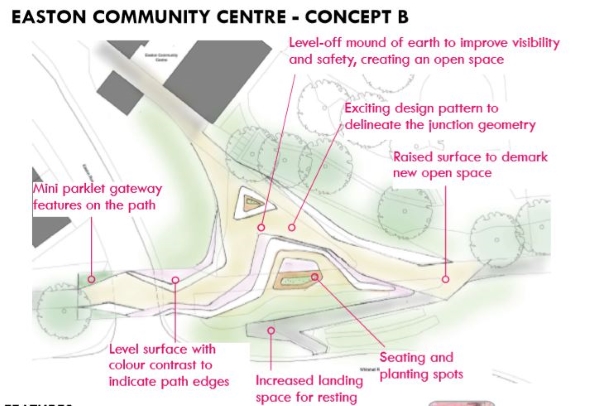 A CYCLING group says some of the changes planned for the Bristol and Bath Railway Path are "dangerous and likely to deter cycling".

Transport charity Sustrans is overseeing a £1.1 million improvement scheme for the path on its final stretch from Clay Bottom through Whitehall, Easton and St Philip's.

The path is used by thousands of people each day and is a popular route to the city centre by bike for commuters travelling from as far as Bath. But the number of pedestrians using the path increases the further into Bristol it gets.

In December, Sustrans unveiled radical design concepts for areas of the path where there were most likely to be issues between pedestrians and cyclists.

But the Bristol Cycling Campaign has raised concerns over some of the proposals, particularly those which include seating and other "obstacles" which the group says will "hinder rather than help" cycling on the path.

Bristol Cycling Campaign chair Nick Davies said: "Our members have been frankly appalled at some of the poorly thought out ideas to put obstacles or street furniture on the direct cycle route. Some of the proposals are both dangerous and likely to deter cycling."

In a detailed, 37-page response to the plans, the group argues for the path to be widened throughout its busiest section to enable separation of cyclists and pedestrians, calling for a three-metre wide cycling section alongside a 2m pedestrian lane.

Particular concerns were raised over the possibility of seating at the sharp bends at Clay Bottom (above), changes to the pedestrian crossing near Whitehall Primary School (below), and changing the direct route of the path near Easton Community Centre (main picture), as well as adding a series of raised tables in contrasting colours.

In its response, the group said: "Conflict between different users is inevitable at busy times on a shared-use path; only effective separation of modes will alleviate this."

The group also said that while there had been a focus on 'speeding cyclists' in the consultations, they represented a "very small percentage" path users, and it said speeding was "a subjective term".

In its response, the group said: "We will oppose any measures which deter cycling (and some of these designs do). That will only increase motoring in east Bristol, with adverse consequences for the local community and the climate."

Sustrans South area director James Cleeton said: "We are grateful to the Bristol Cycling Campaign for taking the time to put together such a considered response, which we will take into account in the work that follows.

"The aim of this project is to create a safe and inclusive space for everyone – including people riding bikes – in line with the community vision. This is what we’re working towards and why it’s so important that we hear from as wide a range of voices as possible.

"The concept sketches we consulted on came about after an extensive engagement process and represented the thoughts and ideas we had heard from the community so far. They’ve prompted debate and further engagement, which is all very useful and has given everyone engaged in the project a lot of food for thought.

"We will continue to work on designs for improvements to the path, including looking at the feasibility of widening – and other options – within the scope and budget for this project. We would welcome a meeting with the Bristol Cycling Campaign in the weeks to come and look forward to further engagement with the wider community too.”

Sustrans will be running an update workshop on the co-design project at Easton Community Centre on February 24, from 5-7pm.

The Sustrans plan can be found online here and the Bristol Cycling Campaign response is here.