RADICAL new designs for some of the busiest sections of the Bristol and Bath Railway Path have been unveiled.

People are being asked to have their say on the designs, which are part of a £1.1 million scheme to improve the path on its busiest stretch as it passes through Whitehall, Easton and Lawrence Hill.

Thousands of cyclists and pedestrians use the path each day.

Transport charity Sustrans is running a 'community-led redesign' focussing on the stretch between Clay Bottom, near Whitehall, and the end of the path at Newtown Park, which is used by up to 1,800 people per hour in morning and evening peak times.

Ideas gathered at earlier public consultations were translated into possible designs, unveiled at two workshops at the Rose Green Centre and Easton Community Centre in December.

The designs on display concentrated on changes to six trouble spots: the 'Clay Bottom Wiggle' near Greenbank Cemetery, where the path goes through two tight bends; the pedestrian crossing next to Whitehall Primary School; the 'Parklet' near Chelsea Park in Easton; the area next to Easton Community Centre, close to the Easton Road and Whitehall Road junction; the railway bridge at Russell Town Avenue; the underpass under St Philip's Causeway.

Ideas ranged from straightforward segregation and raised sections at St Philip's Causeway to park areas with seating and planting at Russell Town Avenue and Easton Leisure Centre, where the course of the path would be diverted to slow cyclists down.

Staple Hill residents Catalina and William Lee, and Sarah Ward, from Downend, were among those who attended the December workshops. 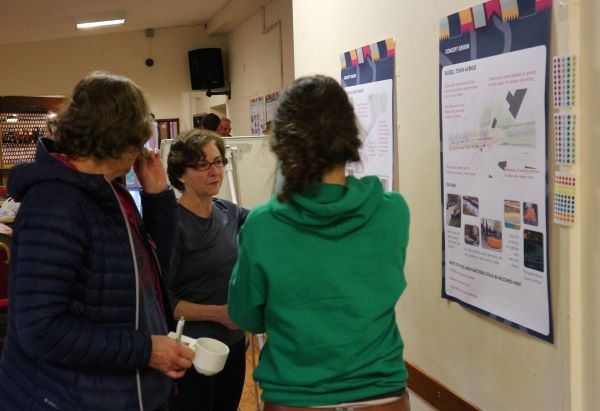 Catalina, above centre, said the changes were trying to "change the mindset of the speedsters", the small minority of cyclists who assumed slower path users would just get out of their way.

She said: "It's not a cycle path, it's a shared path. Some people haven't quite got that yet."

The designs have been published on the Sustrans website and can be found here.

They have already proved controversial, provoking debate on Sustrans' Bristol & Bath Railway Path – OnePath Facebook group, which was set up to help get people involved in shaping the future of the path.

One cyclist said the community Sustrans is engaging with "is viewing cycling as the issue and how they can control it rather than design to accommodate it", saying that creating more shared spaces as the path became overcrowded was "not fixing the problems or making it a safer space".

Sustrans South area director James Cleeton said some people called for the path to be widened and segregated between cyclists and pedestrians along its whole length, but this was not possible everywhere.

He said the aim of the changes was to reduce conflict between path users and ensure everyone who wanted to use it felt safe to do so, striking a balance between ease of movement and being able to enjoy a green space.

James said: "We’ve heard that the excessive speed and close-passing of a handful of the people cycling on the path really does put others off using it."

He said the changes at the six trouble spots aimed to make them "calmer and more enjoyable so that the path really does become ‘for everyone’".

Questions and comments on the plans can be sent to south@sustrans.org.uk.

A further set of workshops will be held in February, on dates to be confirmed.

sgrvoice Labour and Conservatives head to head in final round of Metro Mayor election - Labour lead is 12,019 votes https://t.co/U931DIgJ9n
5 days, 19 hours ago

sgrvoice RT @AvonFireRescue: Today at midday, staff throughout the Service will pause to commemorate of the dedication, commitment and sacrifices of…
1 year ago

sgrvoice Find out how you can help reduce air pollution- event at Summerhill schools this afternoon: https://t.co/fMiYGusUss https://t.co/1pSUobBjS0
1 year, 2 months ago