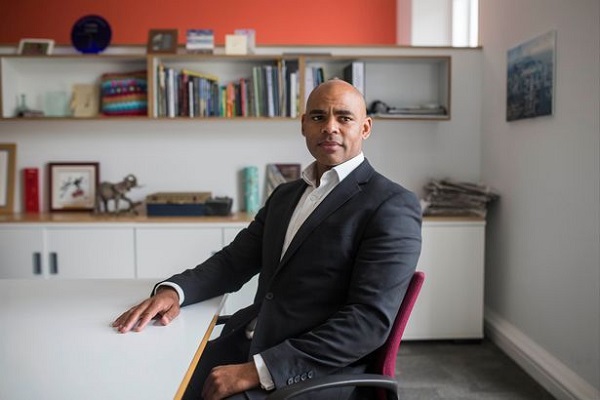 BRISTOL’S Mayor says he saw a man making a Nazi salute and shout ‘Sieg Heil’ during a ceremony to remember George Floyd.

Marvin Rees was among those who were on one knee during a ceremony outside City Hall (see picture below) in memory of the American, who was killed by police officers in Minneapolis last week.

Mr Rees gave details of the incident in a Facebook Live broadcast on Wednesday.

He said: “I’ve just come in from outside City Hall at six o’clock.

“We were taking the knee in memory of George Floyd.

“And I’ll tell you, something happened out there that hasn’t happened to me for a little while.

“A guy walked across the grass, two [supermarket] bags in hand, looked at the crowd, saluted the air, and shouted ‘Sieg Heil’.

“[He] then looked at me – I was the only brown fella there – and pointed at me, said my name and then muttered something, which is probably best I didn’t hear.

“That hasn’t happened for a long time. 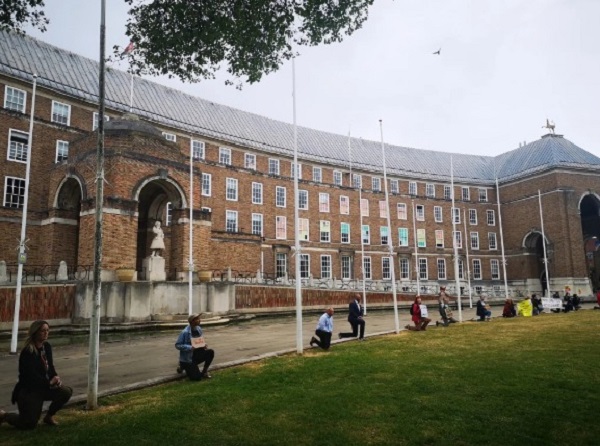 ‘Taking the knee’, or kneeling on one knee in a gesture made famous by American footballer Colin Kaepernick, has become a symbol against racial injustice following the death of Mr Floyd, who died after a police officer knelt on his neck for almost nine minutes during an arrest, despite his cries that he could not breathe. One officer has been charged with murder and three others charged with aiding and abetting second-degree murder.

Mr Rees, who is Europe’s first directly elected black mayor, has been speaking publicly about “lingering racism” in the city this week as Black Lives Matter protests take place around the world.

The mayor, who has Jamaican and Welsh heritage, said that while societal attitudes have changed since he was a child growing up in Bristol, “structural inequalities” continue to serve up social and economic injustice for black people.

He said that although many people have committed to race equality on a personal level in Bristol, there was “lingering racism” in everyday structural inequalities.

“The biggest predictor of where you end up in life is your parents’ income and their socioeconomic background,” he added.

“These are inequalities that are just stitched into the fabric of British life and we don’t want to feel guilty about it – I’m not about getting emotional about it – what I want to say is let’s face up to and begin dealing with it.”

Mr Rees has said he supports the message of this weekend’s Black Lives Matter protest in the city “100 per cent”- but is questioning the wisdom of having a mass gathering during a coronavirus pandemic.

It has been estimated that around 4,000 people will take part in the march between College Green and Portland Square on Sunday.

But Mr Rees said he was worried the mass gathering could “reignite” a second wave of coronavirus in Bristol.

He is asking people to consider finding other ways to express their “passion”, “energy”, “anger” and “desire to see justice done” instead.

Mr Rees said: “I absolutely support the message, 100 per cent. But I think people really need to consider the wisdom of mass gatherings…while we still have Covid in the community.

“We could have an unintended consequence costing black lives and some black livelihoods.”

A second wave of the virus would take a disproportionate share of “black and brown lives”, Mr Rees said.

It would also trigger another full lockdown that would take a disproportionate share of “black and brown jobs”.

“I think the evidence is showing the economic consequences of the lockdown for black and brown people are higher than those for white communities,” he said.

A rapid review from Public Health England released this week showed that people from black and Asian communities were between 10 per cent and 50 per cent more likely to die from Covid than white British people.

Mr Rees said: “We need to express our voice, and we need to think about the best way to do it.

“And we need to be wise in considering the unintended consequences of what we do, and I’m very, very concerned about that.”

In his blog yesterday, the mayor suggested that people could protest by creating a “huge digital presence” instead of taking part in a mass gathering.

Mr Rees is among ten UK core city leaders who have signed a letter to the African American Mayors Association to support them amid racial conflict across the US.

Ahead of Sunday’s protest, Avon and Somerset police chief constable Andy Marsh said officers “want to work with the organisers to make sure everyone taking part in this event are safe”.

The demo is due to start on College Green at 1pm, with participants marching through the city to Castle Park over the following four hours.

Chief Constable Andy Marsh said: “The death of George Floyd at the hands of a police officer in Minneapolis is an absolute travesty and anyone who watched that video are right to be shocked, angry, frustrated and concerned. It must lead to justice and accountability and we understand why people want change and to make sure their voices are heard in support of this.

“Silence in the face of injustice incriminates us all. It’s important we stand up for fairness, equality and inclusion and as your police force, we want to be leading the way on this. We understand why people want to express their anger and demand change but this needs to be done in a way that protects public health.

“The coronavirus pandemic is the biggest health crisis this country has faced for generations and it poses a danger to each and every one of us. Sadly, we know there are inequalities and disparity in so many aspects of life and the impact of COVID-19 on BAME people is also disproportionate. We’d ask everyone to consider their own health, the health of their friends and family and those around them.

“The right to hold a peaceful protest and the freedom of expression are fundamental human rights and an important cornerstone of our society. We want to work with the organisers to make sure everyone taking part in this event are safe and encourage them to follow Government guidance to stop the spread of coronavirus, particularly observing social distancing measures wherever possible.

“We have a long and proud tradition of policing by consent and we’re working 24/7 in our communities to prevent crime and solve problems. We’re continually learning and seeking ways to improve and we’re 100 per cent committed to tackling all forms of bias, racism and discrimination.

“We’re very proud of the strong relationships we have with our communities, which are built on a foundation of trust and transparency, but we know there’s more work to do to make them even stronger.”

sgrvoice Labour's Dan Norris is elected West of England Mayor with a 40,000 majority over Conservative Samuel Williams https://t.co/JoksHlk7rA
1 year ago

sgrvoice Labour and Conservatives head to head in final round of Metro Mayor election - Labour lead is 12,019 votes https://t.co/U931DIgJ9n
1 year ago

sgrvoice RT @AvonFireRescue: Today at midday, staff throughout the Service will pause to commemorate of the dedication, commitment and sacrifices of…
2 years ago

sgrvoice Find out how you can help reduce air pollution- event at Summerhill schools this afternoon: https://t.co/fMiYGusUss https://t.co/1pSUobBjS0
2 years, 2 months ago