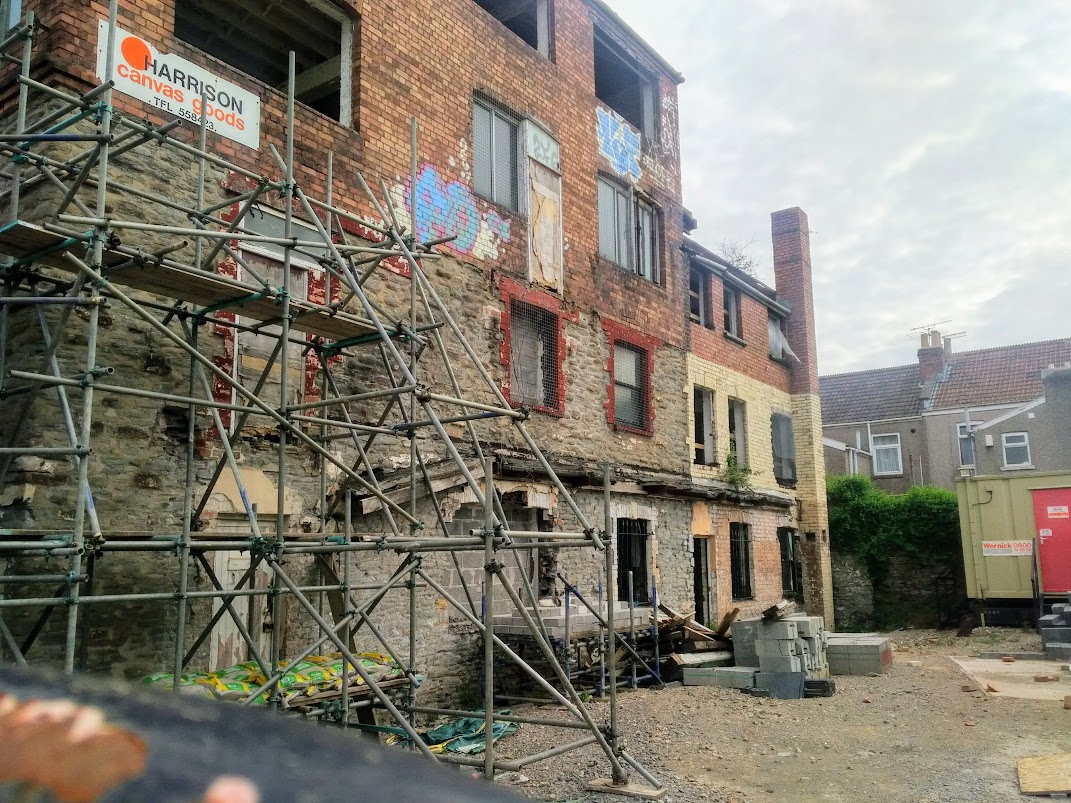 Work has stopped on a building site on Lyppiatt Road on the instructions of the Health and Safety Executive (HSE).

In April the HSE served a Prohibition Notice on the site after the front wall of the remaining building on the site collapsed. The Prohibition Notice was issued because the HSE considered that the developers of the site, Wright Investments Developments Limited, had “not taken all measures practicable to ensure the stability of the structure, leading to a risk of structural collapse and injury”.

The site is owned by Queensbridge Homes Limited. The current planning permission for the site, granted October 2016, is for: eight apartments, four town houses and two commercial units. 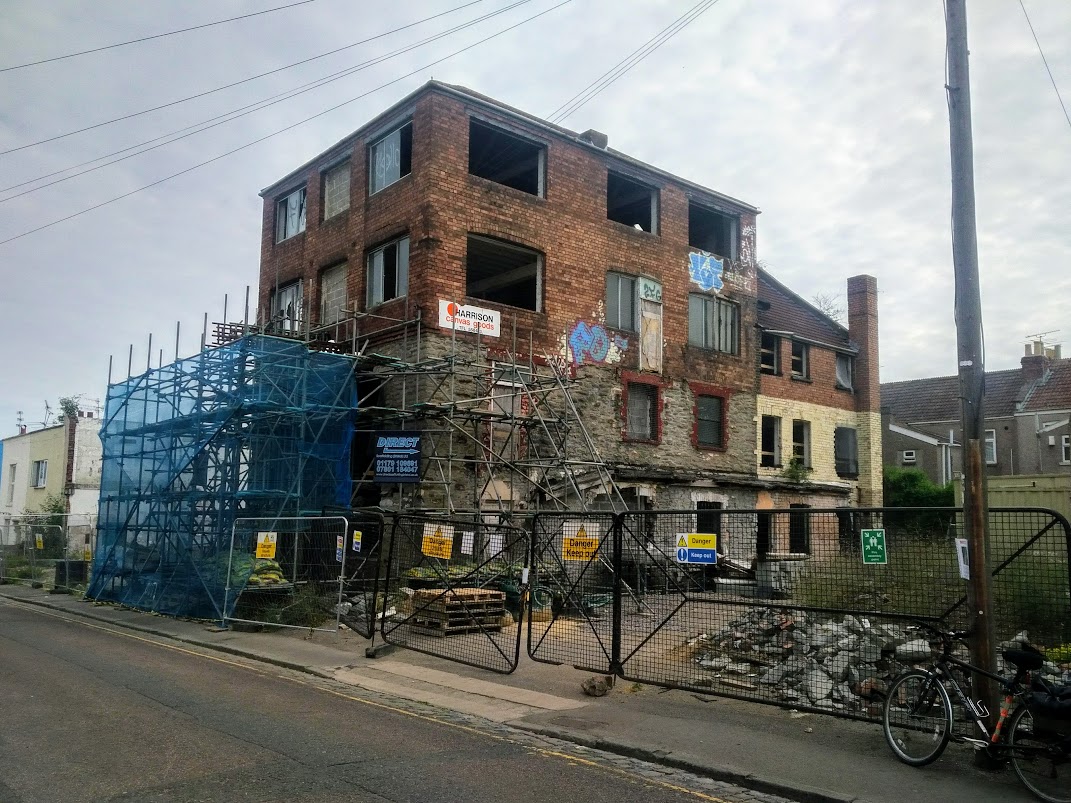 Previous occupants of the now derelict site in Lyppiatt Road include Harrison Canvas and a slipper factory, with the factory building on the site dating back to around 1880. The site now comprises the remnants of the demolished buildings and the remains of a partially collapsed central building apparently being propped up by scaffolding.

It now seems that the partially collapsed building in the centre of the site will now need to be demolished entirely, although Bristol City Council has not yet received a formal application for this. 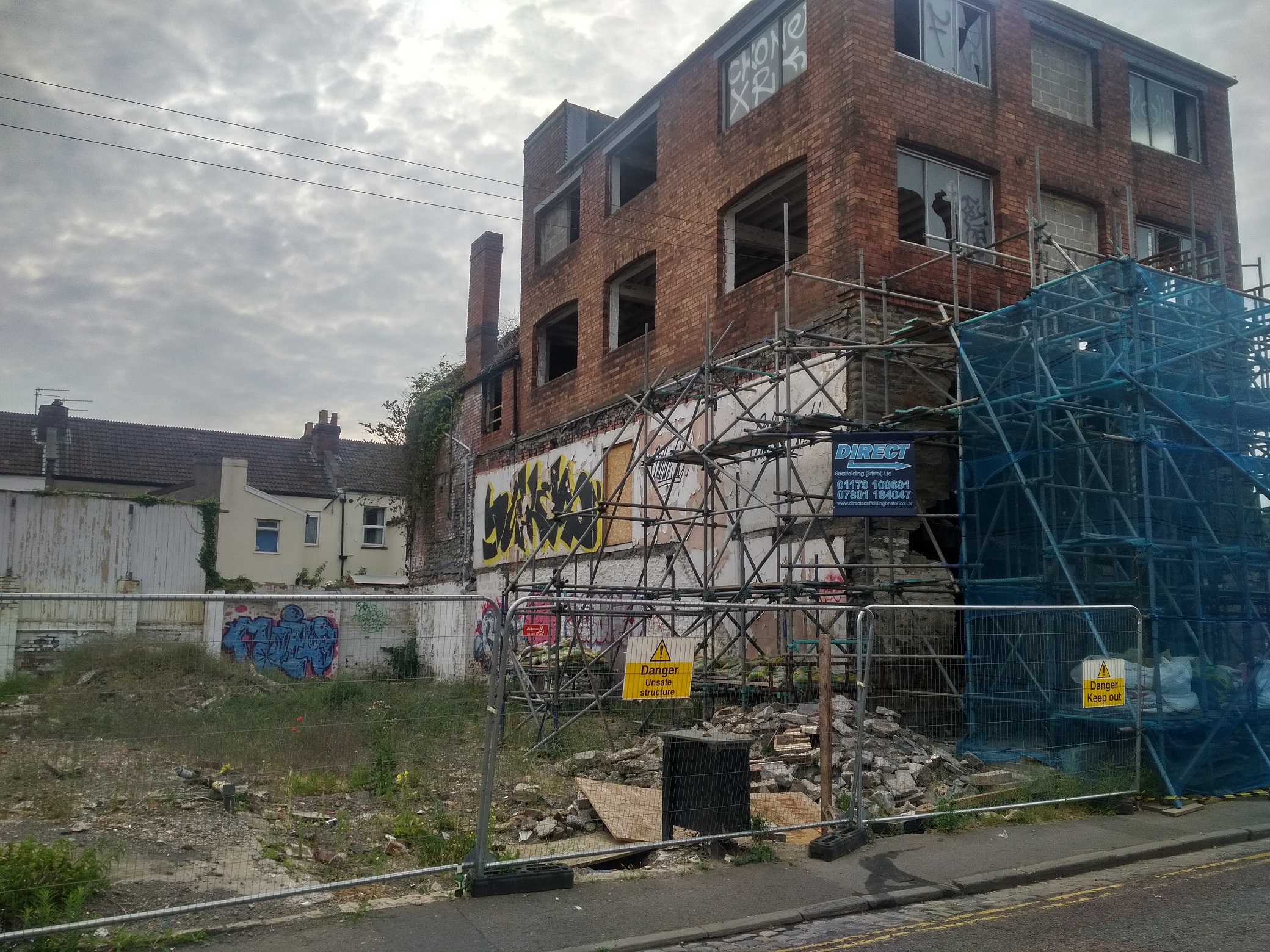 Queenbridge Homes Limited and Wright Investments Developments Limited were both represented at a public meeting called by Cllr Asher Craig held on 4 July 2018 at St George Library. The Voice were at the meeting, and it was clear that many residents of Lyppiatt Road were not happy with the work undertaken on the site to date, or the poor communication with neighbours regarding the site.

One local resident at the meeting referred to the fencing around the site as “about as useful as a paper bag”, with other residents citing an apparent lack of health and safety considerations including workers on the site not wearing hard hats. Others at the meeting commented on a previous fire on the site and the difficulty the fire brigade had accessing the site. One of the local residents at the lively public meeting described the work on a site as a “Mickey Mouse operation with no professionalism”.

Colin Wright, Director of Wright Investments Developments Limited, took a lot of flak at the meeting from local residents concerned about the progress, or rather lack of progress, in developing the site.  Richard Wright of Wright Investments Developments, has subsequently told the Voice that Wright's “will not be involved with the site in mutual agreement with the developer Queensbridge Homes”.

In response to comments about the reported lack of professionalism on site, Richard Wright of Wright’s told the Voice “We have not received any complaints to our office about the ‘professionalism’ of our staff to date.”  “We have been involved in over £18million worth of this type of work in the past 15 years and we have never had a structural failure of any kind in our time in construction.”

With regard to the HSE Prohibition Notice, Richard Wright told us the notice “was a sensible action by the attending [HSE] officer to make clear that the building should not be entered by anyone until the building was made safe.”

Fencing around the site has recently been significantly improved to help keep the site safe. 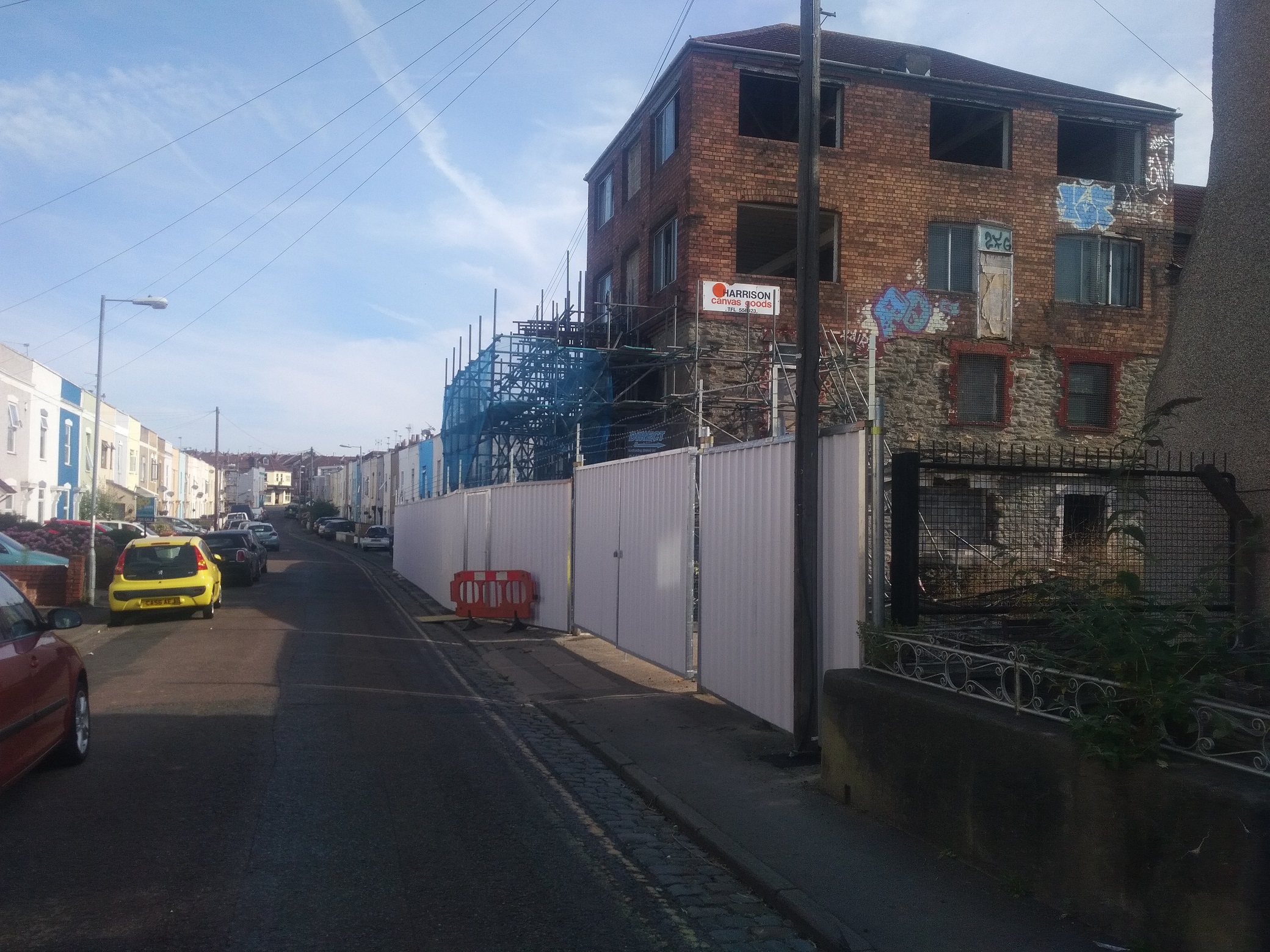 Queensbridge recently circulated a letter to local residents in which they explained “Works on the site commenced again at the end of 2017 and continued on site until the collapse of the front elevation of the existing building at the beginning of March 2018. The contractor has added further temporary supports to the building to prevent any further damage and the site has been closed under a HSE prohibition notice since then” the letter also explained to local residents that Queensbridge “would like to state that they are sorry for any inconveniences caused by this project and they are committed to completing this development as quickly and efficiently as possible with minimum disturbance to the surrounding residents.”

We asked Queensbridge when works were expected to recommence.  Daniel Baker told us "This is currently subject to agreeing a planning amendment. We are currently in talks with Bristol City Council to get an application through as soon as possible. We anticipate a twelve month build period from starting back on site."

Cllr Asher Craig (Deputy Mayor, and Ward Councillor covering the development site), told the Voice that "Following the meeting the plans for the site appear to be moving in the right direction and a series of steps and key actions have been agreed with Queensbridge which includes improved communications with the neighbours."

Anyone with concerns regarding the site can contact Queensbridge via info@queensbridgehomes.co.uk