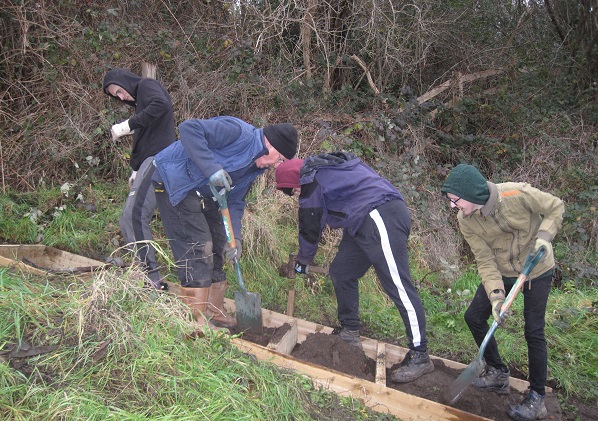 News from the Friends of Troopers Hill

FRIENDS of Troopers Hill will be marking the closing stages of their “Protecting Nature” project with a small celebration on Saturday January 25 at 2pm. Susan Acton-Campbell, chair of the Friends of Troopers Hill, said: “Everyone is invited to come and celebrate, particularly those who live nearby and love Troopers Hill. The last two years have been very busy, we are really grateful to National Lottery players who made it possible for us to spend over £44,000 from the National Lottery Heritage Fund on this beautiful Local Nature Reserve.”

The  event will include a formal signing ceremony of Troopers Hill’s new 10-year conservation management plan, unveiling some of the project works, a guided tour and displays about the project and family fun activities run by Natural Learners. The two-hour celebration will be held at the entrance to Troopers Hill Local Nature Reserve, opposite 111 Troopers Hill Rd, BS5 8BL.

Formal invitations to the event have been sent to representatives of the funders and everyone who has been directly involved in the project, from those who have originally wrote letters of support, to contractors who carried out the work. Acceptances received so far include local Member of Parliament Kerry McCarthy and two member of Bristol City Council’s cabinet, councillors Asher Craig and Nicola Beech. All three provided letters of support for the original grant application.

Visitors to the Hill over December and January will notice final pieces of “Protecting Nature” work being carried out. Steps to two entrances on Troopers Hill Road are being improved by ParkWork, who offer training and skills development for people who need additional support to secure permanent employment. Contractors from Green Mantle will be continuing the conservation work started before Christmas. Out of the public eye, a report is being written of the results of invertebrates surveys carried out during 2019. This will be revealed at the celebration.

Visitors to Troopers Hill may notice another change, unconnected to the project.  A new flag will be flying in January showing the number “25”. This is to mark Troopers Hill’s 25th anniversary since being designated a Local Nature Reserve on June 22, 1995. On that day Stockwood Open Space and Lawrence Weston Moor were given the same designation, creating Bristol’s first three Local Nature Reserves.

In February, the Bristol Astronomical Society will be back on Troopers Hill to support another evening of star gazing. To find out more about this and other events just visit the friends' events page.

The Friends are offering an especially “green” way of working off some of those excess calories that might have been consumed over the winter break.  There is a conservation work party on the first Saturday and third Thursday of every month, starting promptly at 10am and finishing at noon. Meet by the sign marking the start of the audio trail at the entrance to Troopers Hill from Troopers Hill field.