Fond memories of St George Park since my childhood 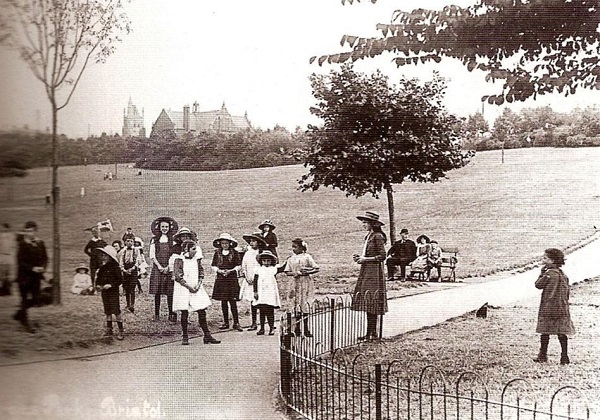 By Grenville Johnson, chair and founder of St George in Bloom

I WAS born in St George just four years after the end of World War Two, and have continued to live in the area all my life.

There was much austerity in the early 1950s, as many varieties of food that we take for granted today were in short supply, and life was less hectic than it is now. Many people at that time did not own a car, so we all relied on public transport or local walks. Holidays abroad were very uncommon at that time, so local parks and green spaces were vital for exercise, socialisation and family gatherings.

I have very fond memories of St George Park from my early childhood. As children we enjoyed great freedom to walk and play in the local park with our friends, and often we were not accompanied by parents and adults. A park ranger was employed by the council who regularly patrolled the park to ensure that all visitors ‘stuck to the rules’. He wore an official uniform and cap and he had the authority to give children and adults a telling off if they broke any of the strict rules that all visitors were obliged to follow.

In the 1950s, the park lake was teeming with small fish – and children encircled the lake to pond dip and catch the small fry. We were strictly told by our parents not to bring them home after our fishing expeditions! We took a clean jam jar from home that was secured by a loop of thick string around the neck of the jam jar to the park. This was accompanied by a fishing net on a long piece of bamboo cane to go ‘fishing’ with our friends. Some local stores near to the park sold fishing nets on bamboo canes, and we also bought sweets from our pocket money to take on the expedition, but we certainly did not dare to drop any litter, as the park ranger kept a careful eye on groups of children who gathered to play.

Within the park was a bandstand – an ornate and original late Victorian cast iron structure that regularly hosted concerts from live bands most weekends. The music permeated the whole park, and on sunny days families gathered to sit on the grass to listen to the live music and concerts. Sadly, the bandstand (below) was removed later. They were magical times. 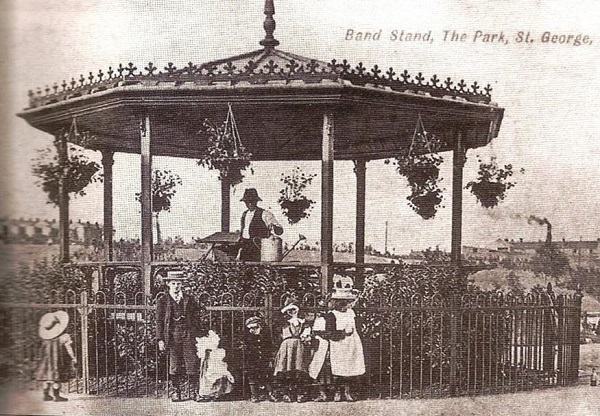 As children we were allowed to hire a pedalo, a small boat that was powered by pedalling our feet that in turn rotated a set of paddles situated on the sides of the small boat. We took a tour of the lake, and we could view the swans and other wild fowl nesting on the island at the centre of the lake. Older children were allowed to hire a canoe. The boats were stored in a large shed near the edge of the lake. A park ranger who was located near to the lake received a small amount of money for the boat hire, and he blew a whistle when the period of hire time expired and we returned our boats back to the set off point. Other play facilities for children included swings with hard wooden seats that were attached by chains to a cast iron frame, a roundabout that would spin very fast and make you feel very dizzy, and a slider which had a highly polished slide, and to reach it we climbed a cast iron ladder.

During hot days we could take a drink of fresh water from a cast iron water fountain that had a metal bowl. The flow of water was activated by pressing a button at the side of the drinking fountain. Later the drinking fountains were removed for health and safety reasons. The numerous floral beds always teemed with colourful planting schemes, and were regularly maintained. Over the last few years, the group that I established, St George in Bloom, has reinstated and maintained several floral beds within the park. The days from my childhood were very happy and memorable times.

For more information on St George in Bloom visit www.stgeorgeinbloom.org.uk

Top picture: A historic photo of St George Park taken during the early years of the 20th century. Note the children’s styles of dress and hats, and the immature trees.