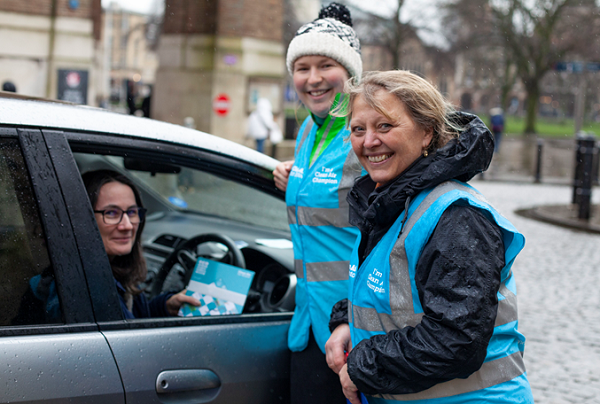 A CAMPAIGN to persuade drivers to turn off their engines while parked or stopped is looking for more people to get involved.

Parents in St George have been campaigning against air pollution in the area, with the St George Breathing Better Facebook group raising awareness and encouraging drivers stopped near local schools to change their behaviour.

Now the council’s Clean Air for Bristol organisation is targeting the area for its No Idling campaign.

It has been training volunteers to talk about the dangers of idling and give information to motorists, pedestrians, and parents waiting to collect their children at other schools. Volunteers ask drivers to switch off their engines while parked or stopped for a minute or more to improve air quality.

Mayor Marvin Rees said: “Idling your vehicle’s engine has significant consequences for air quality and our health. Drivers tend to idle outside of schools and hospitals, where the city’s most vulnerable citizens’ are affected.

“We need individuals to take small actions to make a big difference to the air in our city.”

The initiative comes as the council faces criticism from opposition councillors that changes to the proposed diesel car ban “protect the shopper” but not “the sick person”.

Bristol City Council is under a legal obligation to reduce air pollution in the city by lowering NO2 levels to within legal limits as quickly as possible.

Last year it proposed an inner-city ban on private diesel vehicles that would operate between 7am and 3pm each day and a surrounding clean air zone (CAZ) that polluting commercial vehicles would be charged to enter at all times.

Mr Rees has announced a number of adjustments, including the removal of Cabot Circus car park from the diesel ban zone so that shoppers can get there from the M32.

Changes have also been made to the boundaries around the Cumberland Basin area allowing for diesel cars to travel between the A370 and the A4 north of the river.

And a proposed weight restriction on HGVs on Marlborough Street and Upper Maudlin Street – the city’s most polluted area – has been scrapped, although diesel cars will still be banned from reaching the BRI and Bristol Children’s Hospital during the day.

Mr Rees pointed out that Cabot Circus was a “major employer” and that the city was “walking a tightrope” to meet its responsibility to deliver clean air while taking care of its economy.

You can find out more about the No Idling campaign here and sign up to volunteer here.